One of my favourite persons is Bennie.

Ben Sello Ledwaba is a Sotho and was born on 7th December 1974 in Warmbad (now Bela-Bela), the eldest of 4 children.   He grew up in the town of his birth and eventually matriculated there.  He wanted to become a doctor, but due to circumstances and a lack of funds could not pursue his dream to go to medical school.

As a youngster, he worked in gardens and did odd jobs to earn a living.  One day, on his way to a local shop, one of the employees at the Elephant Springs Hotel in Warmbad offered him a casual job which he duly accepted.  Here he worked as a banqueting manager and bartender.  After this he did a stint at the Witwater Safari Lodge and Spa in Naboomspruit, spent two years living and working in the Kruger National Park, worked for seven years at the Thandabantu Lodge in Polokwane, and returned to the Witwater Safari Lodge for a few years.

Wikus Olivier, the manager of Eagle Rock Executive Guest House ( http://www.eaglerockguesthouse.co.za) in Edleen, Kempton Park, met Bennie at the Witwater Safari Lodge, offered him a position, and Bennie joined the Eagle Rock team in 2014.  (Eagle Rock is my favourite guest house in the Johannesburg area, and  I have been staying there regularly since 2012 due to business travels.)  I met Bennie for the first time shortly after he started there. 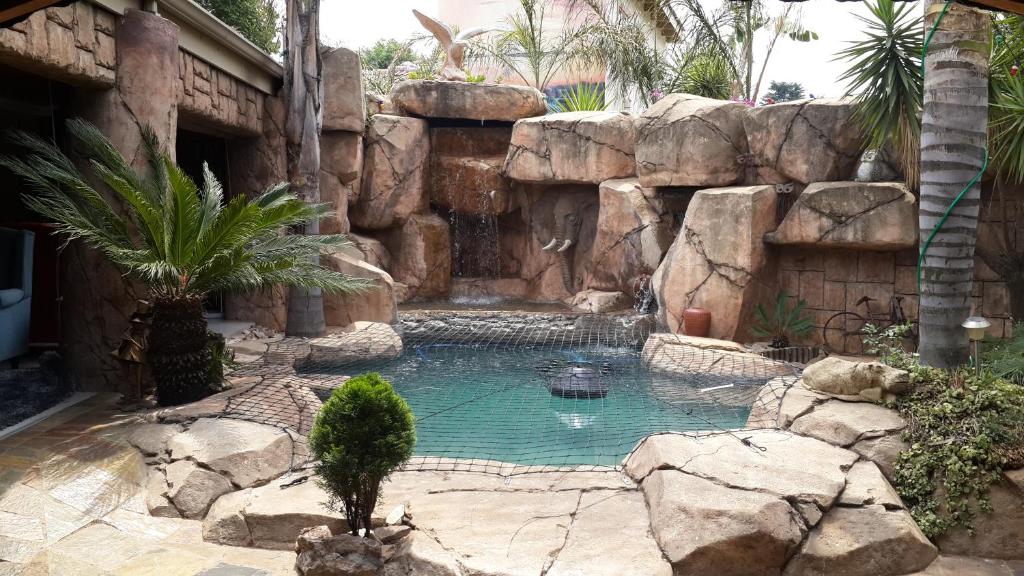 Bennie is married to Kate (who came with him from Bela-Bela and is now the chef at Eagle Rock), and they have three daughters.  Apart from his native tongue – Sotho – Bennie also speaks English and Afrikaans fluently, and can get along in Zulu.  He is now the Restaurant Manager/Barman at the Eagle Rock, where he oversees the kitchen, serves drinks, engages with customers, and generally ensures that everybody is looked after and happy.  Apart from this, he will sign you in, show you to your room, help with your luggage, and just be around to assist and help in any which way he can.

Bennie is one of those rare individuals that always smiles, always have a positive outlook, is always on the go, always energetic.  He knows his customers by name, he knows their specific needs and preferences, and he goes out of his way to serve.  Always moving, always helping, always friendly.

A few weeks ago I observed Bennie in action – interacting with customers, clearing tables, pouring drinks, and doing the things that he does so well.  I asked him the question:  “Bennie, do you like what you are doing?”.  (Not sure why I asked him, because it was clear that he was enjoying himself…)  Instead of the stock-standard “yes”, Bennie’s answer blew me away.  He looked at me, and without hesitation said:  “I have to – otherwise I will not have a life“.

This was such a profound answer.  Deep.  Philosophical.  I have never heard a response like this – ever.  It kept me busy for days.  Mulling it over.  Exploring different angles.  Trying to get the meaning of it.  Eventually, I asked Bennie to explain, and his explanation can be summarised in one word:  CHOICE!

Bennie grew up in difficult conditions in Warmbad.  And, after having worked in the hospitality industry for a number of years, he was without a job for a good while at one stage.  This was particularly hard on him as he also had to support his parents and younger siblings.  He had to make many sacrifices, and the reality and hardship of being unemployed made a huge impression on him.   Although he had always been a go-getter and a pro-active person, the hardship moulded him and motivated him.  For him, having a job is survival.  A means to prevent hardship.  He had been there before and wants to make sure he does not get there again.  Not having  a job, is not having a life.  Basic.  Simple.

But this is where Bennie is different to most people that I know.  Work to him is a lot more than survival.  It is not just about having a LIFE (without hardship).  It is also about LIVING!

Bennie did not choose the hospitality industry – it chose him (literally plucked him off the street).  Long before this he had given up his dream of becoming a medical doctor when he realised that the money would just not be there to support him.  He did not choose his career.  An opportunity came along and he grabbed it.  The job at the hotel in Bela-Bela became a means to an end.  But Bennie CHOSE HIS ATTITUDE!  He made a deliberate CHOICE to go “full-force” and make the best of the opportunity.  He learnt as much as he could.  He volunteered to do other tasks and jobs.  He was promoted.  Given more responsibility.  He did not blame anything or anybody.  He did not hold back and wait for better days.  Instead, he embraced the situation and opportunities that came his way (how many people can say that they have lived and worked in the Kruger National Park for two years!).

I often ask people whether what they do is indeed their chosen career.  And nine out of ten times the answer is “no”.  It seems that most people end up in their jobs or careers by accident.  Maybe they were unemployed and had no choice in taking up a specific job.  Maybe they ended up in a specific career because of their parents.  Or because of a lack of knowledge.  Or because of a lack of funds (for example to complete their studies).  Or because a husband or wife was transferred from one city/town to another.  There are a million reasons why people end up in “accidental careers” rather than “chosen careers”.  Bennie was no different.

I know a great number of people that have made the best of their “accidental careers” and achieved great things.  I also know a great number of people that are still disgruntled, unhappy, dissatisfied, discontent.  They complain and moan.  They blame others, the company, the system.  And as a result they never reach their full potential.  They are always on the lookout for something better, waiting for a better tomorrow.  They unconsciously (sometimes consciously) hold back, and remain average or substandard performers.  Often unreliable, not trustworthy.

“I have to…” is a deliberate choice Bennie made early in his life and is making every day.  He CHOOSES to LIVE.  He made a choice to make his “accidental career” his “chosen career”.  And it shows.  This is the reason why he does it so well.  Almost effortlessly.  Bennie is one of the best examples of the POWER OF CHOICE.  Every choice that a person is faced with requires a decision to be made.  And every decision has consequences.  Bad choices, bad decisions, bad consequences.  The same with good choices.  If you choose to be miserable, the consequences are likely to be miserable.  But if you deliberately choose to be positive – who knows what the positive consequences might be…

For Bennie, having a job is a privilege.  He gets enjoyment from it, and he brings enjoyment to it.  How many people can honestly say that this is how they look at work/their jobs/their careers?

Bennie did not become a medical doctor.  But he is a “doctor” of a different kind today.  What the medical profession lost, the hospitality profession gained.  Through his positive attitude, interest in people, caring nature, and commitment he is having an impact and influence on people around him.

Bennie’s answer to a simple question has a simple but significant meaning:  if you want a meaningful life – despite your circumstances or the cards that you have been dealt – you HAVE to CHOOSE to LIVE a meaningful life….

How do you choose?